Details of programmes over Oct & Nov 2019

This year’s Sikhi Camp took place from 5th to 7th August 2019. Read on for the camp highlights and see the highlight video.

Sunday’s ceremony will see the temple opened with arrival of the Sikh holy scripture, the Guru Granth Sahib.

Scotland’s biggest Sikh temple will open its doors on Sunday after the community raised £3.8m to build it.

The purpose-built Gurdwara in Glasgow’s southside is based on the design of a traditional Punjab temple.

“It is a very exciting project for us”

It is set to become a new spiritual home for Scotland’s 10,000-strong Sikh population and will feature a community kitchen offering free meals.

As many as 2,000 people are expected to attend a special opening ceremony and procession at the temple this weekend.

It is known as a Gurdwara, which literally means “teacher house”.

Surinder Singh, the temple’s president, said: “The launch of the Glasgow Gurdwara is the biggest milestone since Sikhs first settled in Scotland.

“This Gurdwara is a physical depiction of the community spirit and values of the Scottish Sikh community. It is a very exciting project for us.”

The foundation stone for the building was laid in 2010 and work by Scottish firms CRGP and CBC began in February last year.

The temple’s committee travelled all over England to look at the architecture of other Sikh temples, including those in Walsall, Birmingham, and Leamington Spa.

Charandeep Singh, assistant secretary of the Gurdwara’s executive committee, said the temple would be placing particular emphasis on encouraging young Sikhs to get involved in activities at the temple. 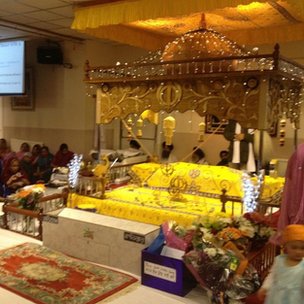 The finished complex features a golden dome and a worship room large enough to hold 1,000 people

“Our focus is to find out what they’re good at, and what their skills are, and see how that can fit into the activity of the Gurdwara,” he said.

“We’re trying to harness the passion and knowledge of young people who are Scottish Sikhs.”

The “extravagant” ceremony on Sunday will see the temple opened with the arrival of the Sikh holy scripture, the Guru Granth Sahib.

Five elders, known as Panj Piare, or “beloved ones”, will lead a colourful procession to deliver the texts.

As well as providing English and Punjabi language classes, the temple will run a community kitchen offering free vegetarian meals for anyone throughout the day.

Mr Singh said the kitchen embodied the values of the religion.

“Everyone is welcome, Sikhs and non-Sikhs,” he said.

“We sit on the floor so we’re all equal. The only restrictions are no cigarettes and no alcohol.”